June 8, 2018
The Next US President Will Save Europe From Russia’s Secret Plot

On the eve of his visit to Austria, President Vladimir Putin told the press: Russia has not the least intention of sowing dissent within the European Union. On the contrary, it is in Moscow’s interests that the EU, its biggest trading partner, remain as unified and thriving as possible.

Europeans have long been quite obsessed with the idea that Russia is bent on dividing and weakening Europe.  In the most prominent English-language media this is practically presumed to be as obviously true as their claims that Russia killed the blogger Arkady Babchenko, attempted to murder the spy Sergei Skripal, and shot down Malaysia Airlines Flight MH17.

As usual, after the Malaysian government admitted that the evidence of Russian involvement in the downing of flight MH17 was inconclusive, the anti-Russian propaganda campaigns were reduced to slim pickings. It was precisely for this reason that the more cutting-edge Western media were so happy to latch onto the murder of the blogger in Kiev. It was precisely for this reason that the very ones who had so desperately hyped that whole episode were so indignant when they realized that they had fallen victim to a bit of ruthless Ukrainian creative license. 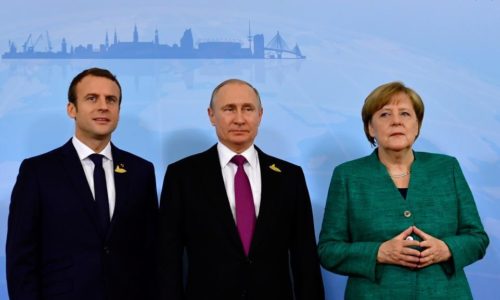 But let’s get back to Russia’s secret plots against Europe. Interestingly, when you trace back the source of most of the warnings about the Russian plots to divide Europe, they seem to emanate from Great Britain. In other words, they are coming from a government that has decided to pull out of the EU but is now trying to direct its foreign policy.

Allegations of Russian plans to fragment Europe have been heard from both the head of Britain’s MI5 intelligence agency as well as from spokesmen from the European Council for Foreign Relations (ECFR). Judging by its name, one might be forgiven for assuming that was supposed to be a pan-European organization. But actually that’s just what’s written on the shingle they hang outside their door, because, in fact, this “think tank” is headquartered and funded in London.

It turns out that the most prominently schismatic states in Europe also hold wildly anti-Russian stances. Neither Great Britain, nor, shall we say, Poland could be suspected of a dearth of official Russophobia. Both of them, each in their own way, are trying to ruin the lives of those countries that form the core of the EU.  Both have closed their doors to refugees and both are bravely waging war against an “influx” of natural gas that theoretically has nothing to do with them. Poland, which gets 17 billion euros a year from the EU budget, has the audacity to be demanding reparations from Germany. Britain, which slammed its doors shut in order to avoid chipping in to fund the EU, is valiantly battling Brussels in order to hold on to its economic perks in Europe.

And in this context, the EU’s biggest common ally — the US — is becoming an increasingly big problem. Washington has unleashed an economic war, not only against Russia and Iran, but also against the countries of Europe. But in the propaganda being rolled out for the European audience, the picture of the world looks like this:

The European Union’s main enemies are Russia and China. It’s true that they do want to trade with Europe and are offering enticements to encourage this, but one mustn’t believe them. Because it is a known fact that they are conducting a hybrid war — invisibly and unprovably — against Europe. Russia is such a wily combatant that one can’t ever prove anything — but you have to believe that it’s true. The European Union’s biggest friend is still the US. And yes, it’s true that they are currently trying to run their friends out of town in order to make a quick buck. But it’s solely President Trump who is to blame for that. Just be patient: soon the next president will come and fix everything right up. And it’s also true that no one can say when that next president will be in office, or what his name will be, or what he will do. And, of course, everyone remembers the Obama administration’s ceaseless attempts to foist an entirely colonial “transatlantic partnership” on Europe. But once Trump’s gone everything will be different — you just have to believe.

And this “you just have to believe” has recently become the main leitmotif of all the anti-Russian propaganda. Since the preferred narrative about the spy, the blogger, and airliner haven’t panned out, the proof of Russia’s malice is increasingly being repackaged as a kind of spiritual evidence. As the Guardian put it so aptly — “We do not need Russia to poison people in a British city to recognise the expanding threat to common values posed by Vladimir Putin’s hostile, corrupt regime.” 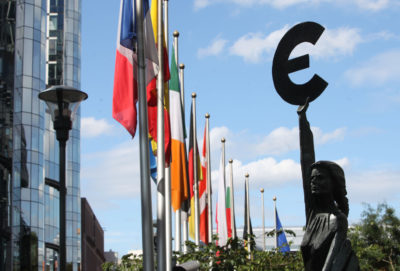 BRUSSELS, BELGIUM – AUGUST 16: A statue holding the symbol of the Euro, the European common currency, stands in front of the European Parliament building on August 16 and 2011 in Brussels, Belgium. (Photo by Mark Renders/Getty Images)

But then how can one explain that in reality, the opposite is true, that Russia actually needs a unified, rich and strong European Union? This isn’t rocket science, people — you don’t need to invoke “values” and chant the mantra of “you just have to believe.”

Russia needs a rich EU, because a rich trading partner has more purchasing power, which gives Russia a positive trade balance with the EU.

Russia needs a unified EU, because a unified Europe that manages its own security issues from a centralized headquarters will present far fewer problems for Moscow than a string of feckless “friends of the US” along Russia’s western borders.

Russia needs a sovereign EU, because the anti-Russian trade sanctions serve no economic purpose for the EU whatsoever — and once Europe establishes sovereignty we will quite likely see those sanctions lifted.

And it is no coincidence that Austria was the first foreign country that Vladimir Putin visited after his inauguration. 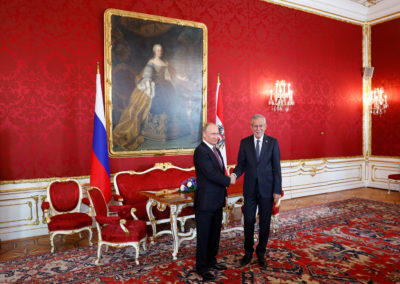 That country is European, rich, and neutral (therefore not a member of NATO) and has been a staunch advocate for the rollback of Europe’s anti-Russian policy.

In other words, in Austria you can see a potential model for the kind of independent European Union that Russia would like to deal with in the twenty-first century.

And this is why the ones who are now so fervently preaching about “shared values” and “Western unity” when faced with the treachery of those natural-gas pipelines and that Eurasian trade route are actually demanding that Europe do itself a disservice by remaining deferential.

Source: The Next US President Will Save Europe From Russia’s Secret Plot