The image of Antarctica in common circulation is environmental and utopian.  The scientist of valour, the investigator thirsting for discovery in a litmus test environment that will give warning about current and impending variations in temperature that will affect the globe.  Noble stuff indeed.

On other occasions, the continent has tickled the conspiratorial mind.  Did Adolf Hitler find relief and sanctuary in such frozen climes instead of perishing in his Berlin bunker in 1945 before the Soviet onslaught?  Did the Nazis establish a base that would dock extra-terrestrial aircraft? Tyle Glockner of SecureTeam10 videos certainly finds food for thought there. “The continent,” he said tritely last year, “has been shrouded in a mystery of its own for years now.”

Despite being deemed a “triumph of the global commons” where “state sovereignty has remained unrecognised” in favour of “the principles of peace and environmental protection”, another, somewhat neglected view, also exists of this glacial wonderland. 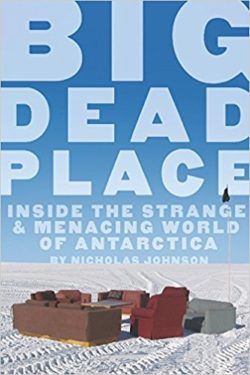 Nick Johnson was one who recorded and chronicled life working in Antarctica at McMurdo Station, doing so with a degree of wit and ruthlessness that led to his masterly compilation Big Dead Place.  But it was not an account of the dingy corridors of White Hall or the dank context of a police state apparatus.  He was considering the human encrustations that had found themselves on the earth’s seventh continent, one filled with its fair share of intrepid explorer corpses.

Venturing to his website, now generally defunct in terms of links, one finds an entry by a certain Lazarus B. Danzig, described as “a manager in an unnamed department at McMurdo Station.”  White collar management is examined and revealed for its absurd guiding principles, a farce in slow motion. “The average manager in Antarctica insists on indoor temperatures that would call for air conditioning were they summering at home. And, while the outside temperatures might for months remain well below zero, they will wear clothing suitable to Sub Saharan Africa or perhaps Polynesia.”

Such is the managers’ role of defiance: to resist, and deny the environment they exist in.  Manual labour is shunned while “Blue Collar day outdoors provides more exercise than a month of inane managerial exertions.”  And it is the role characterised by certain markers: the promotion of mediocrity; the cultivation of “marooned scavengers” who clamber up the hierarchy.

Interviews were also posted, featuring the mocking bleakness rife at McMurdo.  One contractor is philosophical: “Antarctica prepared me for the War Zones, a stepping stone which made the transition to Iraq a little easier.” Another speaks about not being able to get enough disco clothes.  “They are a source of infinite delight.” Then come the somewhat sinister undertone: secrecy, clandestine insinuations and a sense of menace fostered by that big daddy corporation, Raytheon.

Johnson sketches the absurd popularity of Antarctica as façade and the station as micro reality.  “Today,” he writes in one account, “the international science community working in Antarctica is carrying on this proud legacy, helping us to learn more about global processes affecting Earth’s environment.  Consequently, we will have the solid scientific information we need to develop sound environmental policies.”

Other tasks must also be performed.  There are menial but necessary. Needs must also be met, perversions sated.  Johnson was clearing the rubbish and station detritus, an unheralded garbo, personified Blue Collar grunt.  “Though I am a garbageman and I spent Independence Day sorting through vomit-covered aluminium cans, the warm glow of your Midwinter’s Day greeting,” he pens in a note to US President George W. Bush in 2001, “reminded me of my contribution to learning and knowledge.”

Illusions are punctured; hope given a good dampening before a regulated world and hierarchy policed by Raytheon.  He dismisses the nobility of the US mission in Antarctica, which he rightly noted as being less about altruistic engagement than geopolitical fancy.  In such an environment, other projects were being pursued. NASA psychologists, for instance, take to Antarctica’s bases to examine what human behaviour might look like in a simulated lunar setting.

The manager’s response to such accounts as Johnson’s is typical: ignore, deny and repudiate.  Why did he return if he detested his experiences? Why would he actually work in such a horrid environment?  This is the usual deflection adopted by those who wish to accept the horrors they perpetuate, the ghastliness they foment.

On being refused a permit to work another stint at McMurdo, Johnson suffered inexorable decline. After taking his life at the end of a shot gun at his West Seattle home, barely a murmur registered across the US literary landscape.

Johnson seemed drawn to Antarctica, not so much as a doomed explorer finding El Dorado but as part of an intrepid life that took him to South Korea to teach English, drive a taxi in Seattle.  On the most barren of terrains, the most viciously hostile of environments, relief as a sharp observer could be found. It was then taken away from him. In refusing him return, the indifferent bureaucrat’s revenge was assured.