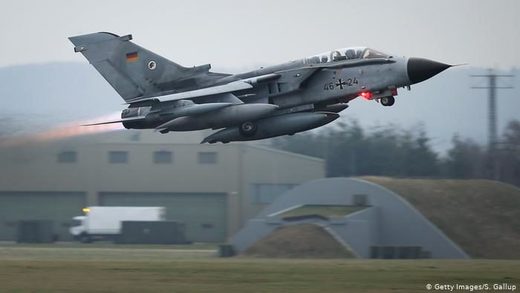 Germany has rejected a US request for German ground troops to move into Syria. German government spokesperson Steffen Seibert said on Monday that Germany would not increase its military presence in the country. On Friday, the US had called for Germany to send ground troops into Syria. “When I say that the government intends to continue with its ongoing measures in the framework of the anti-IS coalition, then that means no ground troops,” Seibert said. ‘Significant military contribution’ The German military currently provides reconnaissance jets, a refueling aircraft and other non-combat military assistance in the fight against IS. Germany has “for years been making a significant and internationally acknowledged contribution” to fighting Islamic State, Seibert said. The US has called for European countries, including the UK, France and Germany, to pledge more support to the fight against Islamic State.
Source: Nein! Germany rejects Trump’s call for ground troops in Syria to replace Americans