Joshua Glasgow — The Solace: Finding Value in Death Through Gratitude for Life 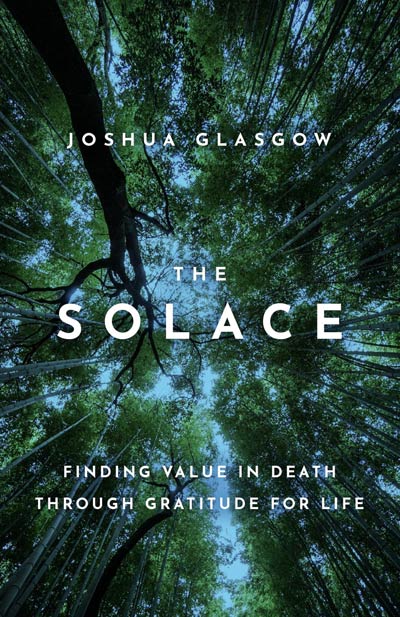 How can we find solace when we face the death of loved ones? How can we find solace in our own death? When philosopher Joshua Glasgow’s mother was diagnosed with cancer, he struggled to answer these questions for her and for himself. Though death and immortality introduce some of the most basic and existentially compelling questions in philosophy, Glasgow found that the dominant theories came up short. Recalling the last months of his mother’s life, Glasgow reveals the breakthrough he finally arrived at for himself, from which readers can learn and find solace. When we are grateful for life, we value all of it, and this includes death, its natural culmination. Just as we are grateful for the value in our lives, we can affirm this value in death.

Joshua Glasgow is Associate Professor of Philosophy at Sonoma State University, where for several years he was also Director of the Center for Ethics, Law, and Society. He works on a variety of topics in ethics and political philosophy. He is the co-author of What is Race?: Four Philosophical Views (Oxford University Press, 2019).

From Michael Shermer’s essay “The Shadowlands,” reprinted in his 2004 book Science Friction

Behind every one of the 6.2 billion people now living lie seventeen others in the ground, for 106 billion is the total number of humans who have ever lived. Our future is sealed by our past.

Sixty thousand years ago, in a cave 132-feet deep cut into the Zagros Mountains of northern Iraq, 250 miles north of Baghdad at a site called Shanidar, the body of a Neanderthal man was carefully buried in a cave, on a bed of evergreen boughs, on his left side, head to the south, facing west, and covered in flowers, so identified through microscopic analysis of the surviving pollens. Already in the grave were an infant and two women. The flowers were from eight different species and the arrangement was not accidental. There was a purpose to the burial process. It is the earliest memorial celebration of life and mourning of death of which we know. Now that Neanderthals are extinct, we are the only species who is aware of its own mortality. Death is an inescapable end to life. Every organism that has ever lived, has died. There are no exceptions.

Thus, we are faced with the existential question that has haunted everyone who has thought about this uncomfortable fact of life: why are we here? People throughout the ages and around the world, in all cultures and communities, have devised a remarkable variety of answers to this question. Indeed, anthropologists estimate that over the past 10,000 years humans have created roughly 10,000 different religions, the well-spring of which may be found in the answers they have offered to that soul-jarring question, why are we here?

Too often, I think, we gloss over the messiness of living and the unpleasantries of life, particularly at the beginning and end, as if birth and death are shadowlands accessible only to a chosen few. We suppress or ignore some of the deepest and most meaningful events of the human condition. It is in those shadowlands, however, where we face the termini of life and share the full experience of the hundred billion who came before us and know authentically what it means to be human.”

From Richard Dawkins, Unweaving the Rainbow

We are going to die, and that makes us the lucky ones. Most people are never going to die because they are never going to be born. The potential people who could have been here in my place but who will in fact never see the light of day outnumber the sand grains of Arabia. Certainly, those unborn ghosts include greater poets than Keats, scientists greater than Newton. We know this because the set of possible people allowed by our DNA so massively exceeds the set of actual people. In the teeth of these stupefying odds it is you and I, in our ordinariness, that are here.

You play a vital part in our commitment to promoting science and reason. If you enjoy the podcast, please show your support.

Source: Joshua Glasgow — The Solace: Finding Value in Death Through Gratitude for Life