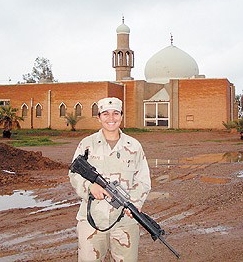 I want Tulsi Gabbard in the Democratic Presidential debates because she speaks out against wars. She raises the topic unasked. She wants various wars ended or not launched. She wants impeachment made automatic for presidents who launch wars. What’s not to love?

I also want Mike Gravel included for the same reason. If anything, he’s even better than Gabbard. But Gravel openly says he doesn’t want to be elected; he just wants to improve the debates. I wish Gabbard would say the same thing. Here’s why.

February 15, 2003, saw the biggest public demonstration in world history. It was against the obvious lies being used to launch a war against Iraq. Whistleblower Katharine Gun risked her freedom to expose the war in March 2003. The United Nations refused to support the war, and its Secretary General joined many world governments in denouncing the war as a fraud and a crime.

By the spring of 2004, over a year later, the lies had been exposed to the satisfaction of most of those who had either believed them or pretended to. The New York Times had publicly apologized. Senators and Congress Members had been compelled to apologize or squirm like weasels. Polls had found a slim majority of the public now saying the war should never have been started. Camilo Mejia had chosen prison over a second tour.

But in April 2003, Tulsi Gabbard had joined the Hawaii Army National Guard, and in July 2004 — JULY FRICKIN TWO THOUSAND AND FOUR, she VOLUNTEERED to take part in the war on Iraq, which she did until 2005. She has, as far as I know, never expressed regret or apologized; it is certainly not part of her standard stump speech — quite the opposite. She has never left the military, and she has never stopped bragging about having performed the “service” of helping to destroy Iraq — even when opposing any similar wars in the same breath.

Now, that combination is a clear cut above your typical warmongering politician, your . . . well, to put it briefly, your Joe Biden-type. Having someone who learns and improves and takes better positions is a benefit to the debates. I’m glad Gabbard has apologized and improved her views on gay rights. I believe her and applaud her. But has she said she’s learned anything about war? Has she, in fact, learned anything about war? Has she apologized? Has she stopped promoting the military? Has she stopped posing in uniform? She’s only removed photos of herself in uniform from her website when the military has complained to her. When repeatedly asked in the first round of primary debates whether she’d ever support a war on Iran, she eventually caved and said yes, if Americans were attacked. Well, what does anyone imagine the Trump gang is putting so many Americans so close to Iran for?

Gabbard seems unable to mention war without both bragging about having participated and believing it to be insanely destructive. The public response to this seems to be schizophrenic. Those who love militarism support that part of what she says. Those who oppose it support that part. The wonderful, principled, and courageous Dennis Kucinich tweeted this during the debate: “Thank you for your strength challenging wars, @TulsiGabbard. Your record of service to America in the military and Congress is commendable.” How is participating in criminal mass-murder both a commendable service and something it’s strong to challenge?

We can also look to her voting record. She has voted against cutting the military budget. But she has voted to keep the AUMF in place. When the U.S. House of Representatives last week passed numerous amendments to create accountability for foreign bases, repeal the AUMF, prevent a war on Iran, finally end the war on Korea, and dozens of other things we don’t usually dare dream of, producing the least awful National Defense Authorization Act in many years, Gabbard didn’t vote.

Gabbard says she wants to end the war on Afghanistan. At the same time, in the same breath in the debate, she suggests that only a member of the military should be president. Is that the kind of nation YOU want to live in?

Here’s where I think we’ve gone wrong. Some of our best peace activists are veterans. It helps that they are veterans both because they know war and because of the widespread and misplaced respect for veterans. Pro-troop propaganda has made us recognize that those making decisions for war from air-conditioned offices are more to blame than direct participants in war. But we’ve gone too far. We’ve come to imagine that participating in an evil war is actually a good thing, even while rates of suicide and depression among veterans suggest that they know better than we do.

This distortion of morality around the propaganda of troopism is compounded by our cartoonish notion of responsibility as developed in a culture of adversarial and retributive justice. We imagine that if someone is responsible for something (such as a president for a war) everyone else is absolved of all responsibility for it. After all, if you prosecuted and convicted a president, nobody could claim you hadn’t achieved vengeance. It would be time for the final credits to roll. But this is equally true: if soldiers didn’t fight, wars would not exist. If something would not exist or not be as strong without your participation, then you are responsible for it, you deserve some bit of the infinite and never-depleted substance of responsibility, as do many, many others.

Is there a value in knowing war up-close? Of course, there is. And there are aid workers and peace activists and war victims who know war up-close. Did it help to elect Eisenhower president because he said he knew war? Perhaps it helped in Egypt. Perhaps it hurt in Iran. The examples of veteran presidents are too few and too much like all the non-veteran presidents to draw any conclusions.

But what about the value of having known enough to oppose war? Why did Barack Obama claim to have opposed the war on Iraq, even while having voted to fund it as soon as he got a chance? Why does Donald Trump pretend both to have opposed the war on Iraq and to be really smart? Because it’s generally not a good idea to give unprecedented reckless imperial power to somebody who’s slow on the uptake. But Donald Trump didn’t just promise to end wars and stop launching them, he also promised a bigger military that would more boldly slaughter whole families. Tulsi Gabbard wants to avoid at least certain wars and end some of the same ones Trump promised to end and then escalated. But does she want to reduce military spending? Does she want to close any bases? Does she want to make the United States party to international law? Does she want to convert to a peaceful economy?

If not Tulsi Gabbard, then who? Well, within the Democratic field of candidates, the vast majority of them are far worse than she is on war and peace. Bernie Sanders isn’t. He’s a million miles from perfect. He also lacks the sadly crucial characteristics needed for the infantile exercise in tokenism that elections have become. But he opposes wars and military spending without feeling compelled every time he does so to also brag about having participated in what he is opposing. How is that not a leading platform for everyone who cares about peace?