According to geologists, an earthquake on the Cascadia Subduction Zone could trigger a similar shaker on the San Andreas fault to the south and thus create a giant seismic event along the U.S. West Coast.

Today, at least 4 earthquakes hit at on near the Mendocino Triple Junction, an area where the Cascadia and the San Andreas Fault meet.
And now a new earthquake research to be presented by Oregon-based geologists next week sounds like a B movie plot.
A great earthquake along the Pacific Northwest’s offshore Cascadia fault triggers another great earthquake on the northern San Andreas Fault.
In what may be a case where science catches up to the fertile imaginations of Hollywood script writers, attendees at a major earth science meeting in San Francisco will hear evidence that this cascade of disaster happened many times over the past couple of millennia.
“I mean, Cascadia is big enough by itself,” said Goldfinger, a professor of geology and geophysics at the university. “But if you add in San Francisco and the North Coast, it is literally almost a grade B movie scenario that people don’t want to think about that much.”
Yes, a major quake from the offshore Cascadia subduction zone could trigger California’s famous San Andreas Fault. And those are two of the most dangerous seismic regions in the U.S.
Goldfinger has been studying the Cascadia Subduction Zone for years. The fault runs roughly 600 miles off the west coast, from northern California to British Columbia, where several smaller tectonic plates are sliding under the much larger North American Plate. That subduction zone is capable of producing earthquakes with devastating destructive potential, up to magnitude 9.0.
The San Andreas fault, by contrast, runs about 750 miles under the northern California coast and parts of inland southern California. It is easily the world’s most infamous fault, responsible for the 1906 earthquake that leveled large parts of San Francisco and the Loma Prieta that shook the same region in 1989.
Unlike the Cascadia Subduction Zone, where plates are sliding under one another, the San Andreas Fault is known as a transform fault, the tectonic plates are moving laterally, sliding past each other.
The two faults meet in an area known as the Mendocino Triple Junction. Now, Goldfinger has found evidence that a quake on one could trigger a quake on the other, in essence making for one giant seismic event that would span the entire west coast of the U.S. 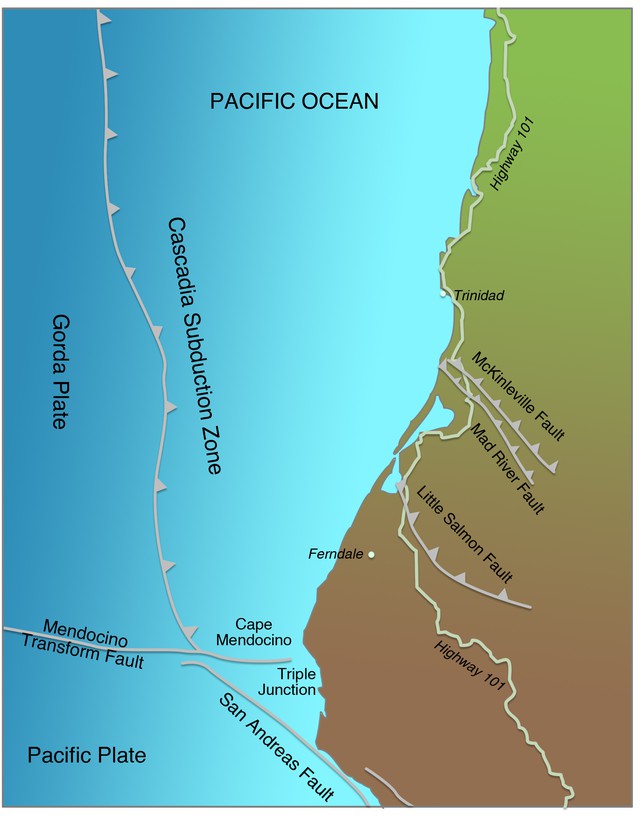 The new results stem from the analysis of sediment cores from the Mendocino Triple Junction area. Those cores, pulled from canyons on the ocean floor, show evidence of earthquakes in the form of underwater landslides. Using carbon dating, Goldfinger found that nearly a dozen earthquakes occurred throughout history on both faults at the same time.
Moreover, the analysis found no evidence for the stress transfer working in reverse – from south to north.
Well, when you have two big faults that connect directly, there’s a pretty high probability they’re going to interact in some way. So one fault triggering another, or even becoming synchronized with the other for a period of time, is not a fantastical scenario. It is actually a fairly likely scenario. It just isn’t on the radar anywhere yet.
But it’s not so common to have linkage across two different kinds of faults, from a subduction zone onto a strike-slip fault. So this is new and interesting.