May 23, 2020
California doctor claims more people have tried to kill themselves in 4 weeks of lockdown than in a normal YEAR California has seen a year’s worth of suicide attempts in the space of four weeks during coronavirus lockdown, according to a trauma doctor.

Medical professionals at John Muir Medical Center in Walnut Creek, California have revealed their experiences in the hospital’s trauma center after mental health took a nosedive amid lockdown.

Dr Mike deBoisblank told ABC 7 News: ‘We’ve never seen number like this, in such a short period of time. I mean we’ve seen a year’s worth of suicide attempts in the last four weeks.’

His colleague, nurse Kacey Hansen, has worked at the medical center for 33 years and has never seen so much ‘intentional injury’.

‘They intend to die. Sometimes, people will make what we call a “gesture”. It’s a cry for help,’ she added.

We’re just seeing something a little different than that right now. It’s upsetting.’

Both medical professionals have called for an end to the state’s lockdown, which is currently due to expire at 11.59pm on Sunday, May 31.

And Ms Hansen added that it should be okay to visit people in the name of mental health, so long as masks are worn and distance is kept.

Dr Mike said the point of lockdown was to flatten the curve, which the state had already achieved by April.

He said it was important to end the lockdown and save the people who are suffering mentally, and may not survive if it continues.

MailOnline has approached the John Muir Medical Center in Walnut-Creek for comment.

In late March more people died in one Tennessee county from suicide than in the entire state from coronavirus, according to The Washington Examiner.

A study published in early May found at least 75,000 deaths could be brought on by anxiety and addiction to drugs and alcohol during the lockdown.

Another study by Just Facts input a broad range of data showing stress is one of the deadliest health hazards in the world. It claimed the coronavirus lockdown will destroy seven times more years of human life than strict lockdown can save.

It comes after more than 500 doctors signed a letter to President Donald Trump calling the state coronavirus lockdowns a ‘mass casualty event’ which were causing ‘millions of casualties’ from alcoholism, homelessness, suicide and other causes.

Dr Simone Gold, an emergency medicine specialist in Los Angeles, was the lead signature on the letter – from the One Doctor A Day group – which sought to ‘express alarm over the exponentially growing negative health consequences of the national shutdown.’

The group appears to have been set up with the assistance of a Republican public relations firm in Washington D.C. which distributed the letter.

Gold is a member of the ‘Save Our Country’ coalition which is led by another Trump ally, Art Laffer, the conservative economist who has also spoken out against lockdown.

One Doctor A Day’s talking points echo almost precisely those advanced by the White House at a cabinet meeting earlier this week, that people will die because of lockdown.

In the letter, the doctors explain that during a mass casualty incident, ‘victims are immediately triaged to black, red, yellow, or green.’

‘Millions of Americans are already at triage level red,’ the doctor state in the letter. ‘These include 150,000 Americans per month who would have had a new cancer detected through routine screening that hasn’t happened, millions who have missed routine dental care to fix problems strongly linked to heart disease/death, and preventable cases of stroke, heart attack, and child abuse.’

‘We are alarmed at what appears to be the lack of consideration for the future health of our patients,’ the doctors add. ‘The downstream health effects … are being massively under-estimated and under-reported. This is an order of magnitude error.’ 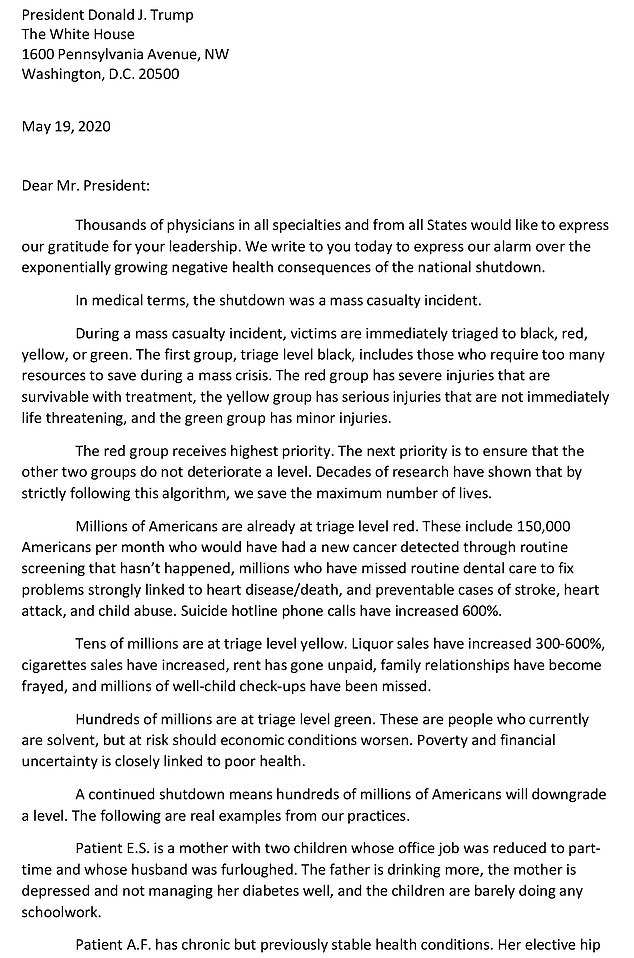 Source: California doctor claims more people have tried to kill themselves in 4 weeks of lockdown than in a normal YEAR