Britain’s War on Truth and Dissent 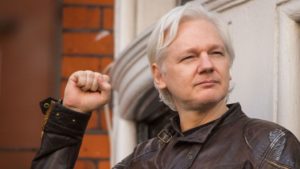 A man is confined for seven years of his life to a diplomatic compound, fearing arrest for exposing some of the worst war crimes and financial misdoings of the past two decades, only to be stripped of his asylum status in a blatant mockery of international law before being locked away in a high security prison to await extradition and a possible life sentence. The press has obediently mounted a campaign to discredit the man, accusing him of every imaginable cardinal sin, and everyone who speaks out is accused of treachery.

To most of us, this sounds like a horror story from behind the Iron Curtain, some cartoonish portrayal of the Evil Empire whose citizens live a lie and where dissidents disappear without trace.

But this isn’t the Evil Empire, not according to Reagan at least. This is twenty-first century Britain, whose ancient democratic institutions lie at the heart of her national identity.

The man, needless to say, is Julian Assange who today pays the price for defying the institutional rot at the heart of Western governments; a rot we pretend does not exist.

Documents showing the medieval depravity that is Guantanamo Bay, details of a dirty multi-million dollar scheme to snatch up mining rights in the Central African Republic and, of course,